I tried to get up early to run today.  I made it out of bed at about 6:50 AM which doesn't really give me enough time, but I decided to go anyway.  It has been a long time, probably many years, since I have run in the morning.  I got up and started only a few minutes later.  It was rough at first, but once I got going it felt pretty good.  It was about 50 degrees and the sun was starting to shine, so the weather wan't too bad. 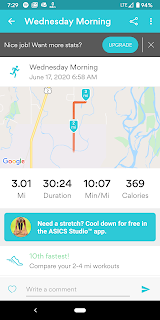 My average pace was about normal for me.  I've been trying to get under 10 min. / mile.  I was quick on my last mile.  Just over 9 min.  It took me a while to wake up and get going, so I had some reserves left at the end I guess. 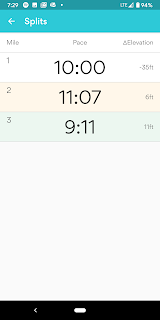 We have been a 50 mile running challenge this June, like I mentioned in my previous post.  We are half way through the month now and I have completed about 18 miles.  I'm going to have to pick up the pace a bit if I plan on finishing on time.  I ran 5 miles a couple days ago and I felt pretty good.  I'm hoping to do 6 miles in a few days.  I'll try to do a few shorter ones in the mean time.  Hopefully if I can keep up the shorter ones and work in a few longer runs I can easily get the miles in before the end of the month.

That's all I have for now.
Posted by Matt Dyer at 2:10 PM No comments:

For the month of June my wife and some friends and I are doing a running challenge since all the races have been canceled.  For this month we will just be running/walking 50 miles total, so an average of a little over 1.5 miles per day.  It shouldn't be too hard to keep up that pace.  We all needed something to get us motivated again.  If it goes well we may increase the total next month.  Either way we will do another challenge next month.

Other than this I haven't been exercising in any other way recently.  I hoping to get back to working out a little this month also.
Posted by Matt Dyer at 1:21 PM No comments: